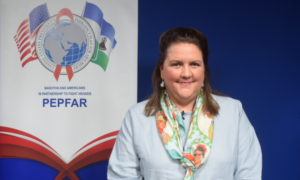 The DREAMS (Determined, Resilient, Empowered, AIDS-Free, Mentored, and Safe) partnership was initiated in Lesotho in 2015 and works across 10 Sub-Saharan African countries to reduce new HIV infections in adolescent girls and young women (AGYW). With PEPFAR support, this ambitious program seeks to combat HIV/AIDS by protecting, empowering, and investing in young women. In 2020, the United States increased its investment in the DREAMS Lesotho program from $10 million to $14 million (approximately 219 million Maloti). This additional funding has allowed the program to expand its work across four districts – Maseru, Berea, Mafeteng, and Mohale’s Hoek, and increase services to AGYW, a particularly vulnerable segment of the Basotho population.

Ambassador Gonzales noted her strong belief in the DREAMS mission and encouraged all Basotho girls and young women to participate in the life-changing program.

“I have had the privilege of meeting so many Basotho girls and young women who have inspired me by their courage, resilience, and desire to empower themselves, those around them, and their country. When the rights of women and girls are recognized, when their needs are met, and when their voices are heard, they are empowered to drive change in their families, their communities, and the world,” remarked Ambassador Gonzales.

The campaign also announced the deployment of 38 DREAMS Ambassadors. These young women were selected from within the DREAMS program based on demonstrated leadership and their ability to work as community-level advocates, linking their peers to services and generating heightened public awareness of the DREAMS program across their communities.

Ambassador Gonzales has pledged to work directly with First Lady Majoro and Minister of Health Maqelepo to empower the newly selected Ambassadors as they ensure the DREAMS program continues to support the resilience of adolescent girls and young women across Lesotho.