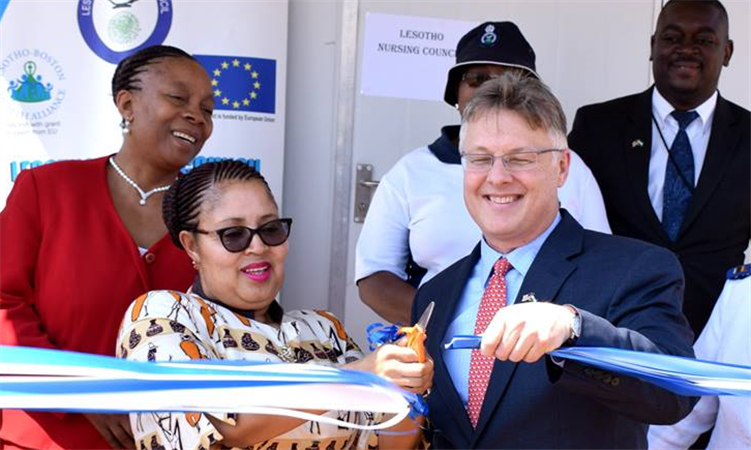 In an effort to strengthen the Lesotho nursing system’s capacity to respond to HIV/AIDS priorities, the U.S President’s Emergency Plan for AIDS Relief (PEPFAR) through the United States Agency for International Development (USAID) has been supporting the Lesotho Nursing Council (LNC) since 2010 to ensure that LNC is well established to carry out its mandate of regulating nursing and midwifery practice in Lesotho. PEPFAR also supported LNC with the implementation of successful VMMC/EIMC Task sharing pilot for nurses and midwives. As a result, the MOH Ministry of Health has given approval to LNC to ensure that roll-out of the implement the roll out of task-sharing process for VMMC/EIMC to the nurses and midwives is implemented

Ambassador Harrington remarked at the event, “Under this partnership, PEPFAR, through Jhpiego, is investing more than $23.8 million towards VMMC, EIMC and training nurses and midwives so that they have the tools to help mitigate the twin scourges of HIV and TB in Lesotho.  Together under all USG nursing education initiatives, six nursing schools in Lesotho have been supported. Since 2010 more than 2,400 first-year nursing students have enrolled in pre-service education programs, and there have been more than 2000 graduates from such programs.  Over 2000 students with support from these programs have successfully competed nursing preceptorships in Primary Health Care settings.  Furthermore, with PEPFAR support, Jhpiego has also been able to strengthen the Lesotho Nursing Council as an accrediting body for nurses and midwives.”

Through the PEPFAR, the U.S government has committed more than $350 million since 2007 to the struggle against HIV/AID in Lesotho. PEPFAR has committed an additional $80 million in Lesotho for the coming financial year beginning October 2017 in order to build on the strides the country has made over the years to reach the UNAIDS 909090 targets and eventually overcome the HIV/AIDS burden.