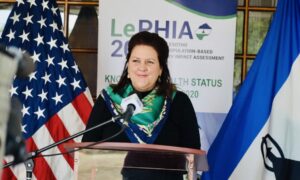 Maseru, Lesotho, August, 18, 2021: Today, Ambassador Rebecca Gonzales joined Lesotho Minister of Health Semano Sekatle and representatives from ICAP at Columbia University for a virtual event to announce the final results of the Lesotho Population-based HIV Impact Assessment (LePHIA 2020) survey.  LePHIA 2020 is a household-based national survey that was conducted between December 2019 and March 2020 to measure the status of Lesotho’s national HIV response.  LePHIA 2020 is the second LePHIA survey; the first was completed in 2016-17.

Led by the Government of Lesotho through the Ministry of Health and the Lesotho Bureau of Statistics, LePHIA 2020 was conducted with support from the U.S. President’s Emergency Plan for AIDS Relief (PEPFAR) and was implemented by ICAP at Columbia University with technical assistance from the U.S. Centers for Disease Control and Prevention (CDC).  LePHIA 2020 was conducted in 9,665 households and included 16,468 participants aged 15 years and above.  The survey offered HIV counseling and testing with immediate return of results, HIV viral load testing, and collected information about the uptake of HIV care and treatment services.

LePHIA 2020 provides evidence of the excellent achievements of Lesotho’s HIV program.  It demonstrates that Lesotho has achieved the first of the UNAIDS 90-90-90 targets and has exceeded the second and third 90 targets.  These findings position the country well as it aims to achieve the revised and more ambitious UNAIDS targets of 95-95-95.

In a country with a population of 2.1 million, the survey found 22.7 percent – approximately 324,000 – of adults (aged 15 years and older) were living with HIV.  Among adults, the annual incidence of HIV was 0.45 percent (0.64 percent among women and 0.28 percent among men), corresponding to about 5,000 new infections per year.  The survey also highlighted the following findings: