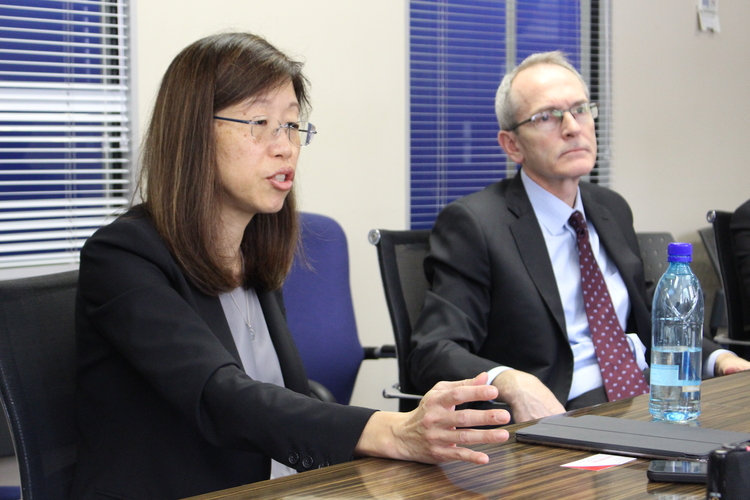 From February 12 – 14, 2018, a delegation from the U.S. Government’s Millennium Challenge Corporation (MCC), comprised of Kyeh Kim, Principal Deputy Vice President, Africa; Tom Kelly, Acting Vice President, Department of Policy and Evaluation; and Jason Small, Managing Director, Africa, visited Lesotho to discuss the development of an MCC compact to reduce poverty and promote economic growth in partnership with the Government of Lesotho. Lesotho was initially selected by MCC’s Board of Directors as eligible for a second MCC compact in December 2013, and was reselected in December 2017, after a two-year hiatus.

“The decision by MCC’s Board of Directors to reselect Lesotho is acknowledgement of the Government of Lesotho’s actions to address MCC’s ongoing rule of law concerns, including the implementation of the Southern African Development Community recommendations,” said Principal Deputy Vice President Kyeh Kim. “Lesotho’s continued commitment to rule of law, accountability and investing in its people will remain important as we work toward our shared goal of reducing poverty through economic growth.”

During their visit to restart development of an MCC compact, the U.S. delegation met with senior Lesotho Government officials and political party leaders, civil society and the private-sector to discuss MCC’s approach to country partnership and the compact development process going forward.

U.S. Ambassador to Lesotho Rebecca E. Gonzales noted, “The ongoing positive impact of the first MCC compact is a testament to the tremendous collaboration between the United States and Lesotho, and we look for the Government of Lesotho’s continued commitment to these early investments. As we build on this partnership of mutual accountability, we remain committed to supporting Lesotho as it undertakes an inclusive, transparent, and comprehensive national reform process, which is essential in achieving sustainable economic growth and long term stability.”

Using an approach that reflects a country’s own priorities, MCC provides time-limited grants and assistance to developing countries that meet rigorous standards for good governance, from fighting corruption to respecting democratic rights. Working with local partners, MCC tackles some of the most pressing challenges that developing countries face, such as access to electricity, clean water, land rights and roads.

During the compact development process, which can take between 24-36 months to complete, MCC and the Government of Lesotho will develop a program specifically aimed at addressing the country’s greatest constraints to economic growth. With elements of the constraints analysis already completed, MCC and the Government of Lesotho will work together to validate findings and move to identify specific issues that could be addressed through targeted investments and activities. The compact development process also includes a consultative process, engaging civil society and the private sector in Lesotho.

MCC’s continued partnership with Lesotho also recognizes successful completion of a first compact in 2013, and the Government of Lesotho’s continued commitment to maintaining these investments.