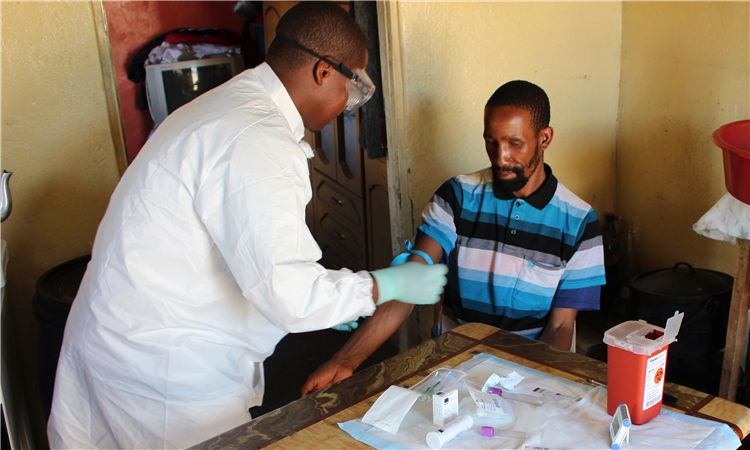 LePHIA Staff at work during the survey

On Thursday, September 21, the Right Honorable Prime Minister Dr. Motsoahae Thomas Thabane will announce the results of the Lesotho Population-based HIV Impact Assessment (LePHIA) survey at the 72nd session of the UN General Assembly in New York.  LePHIA was conducted from November 2016 to May 2017 in order to measure the reach and impact of the country’s HIV prevention, care and treatment services. The survey was conducted nationally in 10,000 households and with 15,000 participants. The initial results from the LePHIA survey reveal significant progress in controlling the HIV epidemic.

Below are the key findings from the LePHIA survey among adults ages 15 to 59 in Lesotho:

In his speech the RT. Honorable the Deputy Prime Minister Monyane Moleleki confirmed the Lesotho government’s commitment to build on the achievements made and to keep combatting the possible gaps that this important survey might show.

The survey also reveals that Lesotho is making remarkable progress towards achieving the UNAIDS 90-90-90 targets among adults 15-59.

The government of Lesotho’s decisive move to launch the test and treat policy in 2016 can be expected to promote further progress in controlling the epidemic by increasing the number of PLHIV who are on antiretroviral treatment.

U.S. Ambassador Matthew Harrington commented that the LePHIA results to should be used to inform the work ahead. Ambassador Harrington noted, “LePHIA has shown us that Lesotho is making remarkable progress towards achieving the UNAIDS 90-90-90 targets. Now that we have this information and along with other available data the next step is to keep the momentum going and maximize available resources to achieve an AIDS-free generation in Lesotho.”

LePHIA was led by the Government of Lesotho through the Ministry of Health (MOH), conducted with funding from the U.S. President’s Emergency Plan for AIDS Relief (PEPFAR) and technical assistance through the U.S. Centers for Disease Control and Prevention (CDC). The survey was implemented by ICAP at Columbia University in collaboration with local partners, including the Lesotho Bureau of Statistics (BOS) and the National University of Lesotho (NUL).