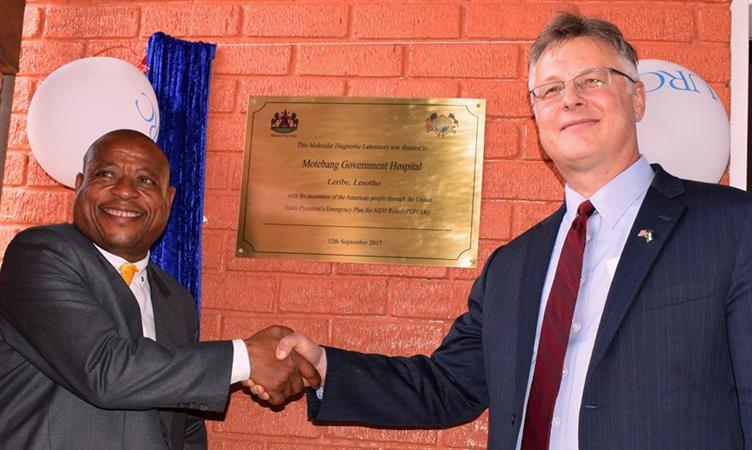 U.S. Ambassador Matthew Harrington and the Minister of Health Mr. Kaya Nyapane officially launched the $180,000 refurbished Molecular Diagnostic Laboratory at Motebang Hospital in Leribe, September 12, 2017. This lab will help provide viral load monitoring for people on antiretroviral treatment (ART) and early diagnosis of infants exposed to HIV. This will contribute to the Ministry of Health’s Test and Treat strategy which recommends that anyone infected with HIV should begin treatment as soon after diagnosis as possible.

Through the President’s Emergency Plan for AIDS Relief (PEPFAR) the U.S government has committed more than $350 million since 2007 to the struggle against HIV/AID in Lesotho. Nearly 10% of those funds have been invested in strengthening the laboratory and health systems. The viral load lab will work to reduce the burden of HIV on patients, and enable clinicians to provide better management of the disease by monitoring the viral load of people living with HIV who are on ART.  When a patient has an undetectable viral load, it shows that their treatment is successfully suppressing the virus and the risk of them transmitting HIV is very low.

“Recently, we celebrated the 50 years of partnership and diplomatic cooperation between the United States and the Kingdom of Lesotho. For the past half century, we have worked together toward our shared goal of a stable, healthy, and prosperous future for all Basotho. For a decade, we have been by your side in the fight against the HIV/AIDS epidemic, and we will continue to commit substantial resources and work hand-in-hand with government, other external partners, and civil society to help Lesotho achieve an AIDS-free generation.” Said Ambassador Harrington said at the launch.

The Motebang Hospital Laboratory will support referral Viral Load testing from the 26 health centers and 2 hospitals in the Leribe District. This laboratory will be able to process at least 50,000 blood samples annually and meet the needs for the viral load monitoring in Leribe District which will also contribute to the national response against the HIV epidemic.

With the generous support of the American people, PEPFAR has committed an additional $80 million in Lesotho for the coming financial year beginning October 2017 in order to build on the strides the country has made over the years to reach the UNAIDS 909090 targets and eventually overcome the HIV/AIDS burden.