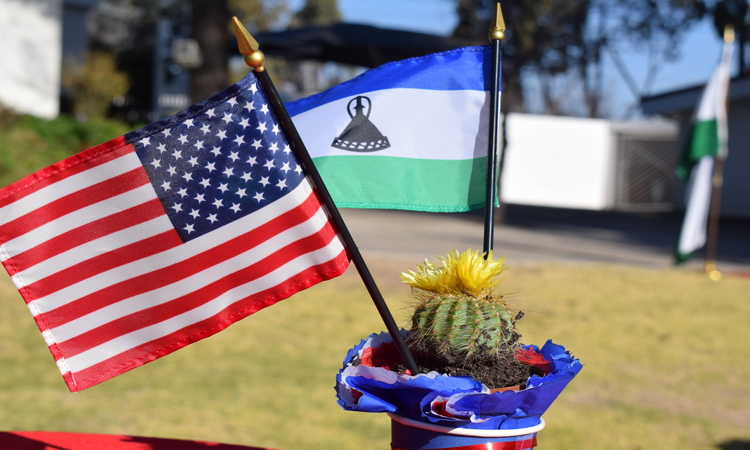 Good afternoon and welcome to all of you.

Before I begin, please allow me to pay my respects to:

His Majesty the King
The Right Honorable the Prime Minister

Honorable President of the Senate
Honorable Speaker of the National Assembly
Her Ladyship the Chief Justice
Honorable Deputy Prime Minister
Honorable Ministers of His Majesty’s Cabinet, many of whom are here with us today, including the Honorable Acting Minister of Foreign Affairs and International Relations, Ntate Lebohang Hlaele, who will share some thoughts with us shortly,

Their Lordships Judges of the High Court
Their Excellencies, Heads of Diplomatic Missions and International Organizations
Honorable Members of Parliament
Leaders of Political Parties
Church Leaders
Members of the Embassy Team
Distinguished Guests
My fellow Americans

I am so honored and delighted to welcome you all here to my residence to celebrate the 242nd anniversary of the Independence of the United States of America. Even though I arrived only five months ago, I see so many familiar and friendly faces here today. I am deeply grateful for the incredibly warm welcome I have received here in the Mountain Kingdom – not just in Maseru, but all over this beautiful country.

Right after I arrived, I realized I needed to travel outside Maseru to meet Basotho where they live, study, and work. My goal is to visit all ten districts of the country in my first year, which coincides with 10 years of PEPFAR in Lesotho. I’ve made a pretty good start – I’ve been to five districts so far.

In addition to witnessing the breathtaking scenery, I am struck by the depth and impact of the partnership between Americans and Basotho and the enormous capacity and untapped potential of this country.

Today I would like to elaborate on a few of the most significant areas of our partnership, including our support and determination to see Lesotho achieve its goals through the reforms process. Many positive steps have been taken, yet much work remains to be done. The United States acknowledges the important efforts of our international partners, including SADC, the United Nations, and the European Union, to further the multi-sectoral, inclusive, and transparent reforms and our shared development priorities.

The U.S. government, through the President’s Emergency Plan for AIDS Relief (PEPFAR), is proud to partner with the people and Government of Lesotho in accelerating Lesotho’s progress towards achieving HIV/AIDS epidemic control.  Through PEPFAR’s 10 years of partnership with Lesotho, the United States has invested over 4 billion Maloti in the fight against HIV/AIDS.

What that means in real terms is that we provided 3.4 million HIV tests to Basotho, treatment for nearly 200,000 people living with HIV/AIDS, voluntary medical male circumcision for close to 177,000 men, and medicine for 78,000 pregnant women to ensure they do not pass the infection to their babies.

This is a massive effort and we are truly proud of our collaboration with the Government of Lesotho, specifically the Ministry of Health, and our implementing partners.  As we look ahead to the next financial year, let me assure you, we are committed to saving lives through PEPFAR. In order to so, however, we need your commitment to accountability, efficiency, and impact.

I am pleased that Lesotho was reselected last December to begin development of a second compact. Since then, MCC has sent a high-level delegation and multiple technical teams to engage with their Basotho counterparts to chart the course forward.  I want to stress that, like the first one, this compact is for the people of Lesotho, first and foremost. Our goal is to work in partnership with all stakeholders to develop investments that will reduce poverty and spur economic growth.

As you know, MCC works by addressing the underlying constraints or barriers to private investment. The compact development process is a long one, designed to benefit all Basotho, not one group or government above another.  So I urge you all to stay the course on the reforms as is necessary to make our joint investments the most beneficial and sustainable over the long term.

No matter where I travel in Lesotho, I see great opportunity to expand our partnership in economic development.  Under AGOA, Lesotho remains the second-ranked exporter of textiles to the United States and one of the top ten exporters overall. We are proud that through AGOA, 40,000 Basotho are employed in the textile sector. Those workers, primarily women, support over 110,000 family members and a vibrant downstream market.  We urge Lesotho to take greater advantage of AGOA by expanding trade under the thousands of other approved product lines.

Two weeks ago, I went to Johannesburg to address the South African branch of the American Chamber of Commerce. They were so interested to hear about the opportunities to do business in Lesotho in industries ranging from agriculture to mining to energy. As the U.S. Ambassador, I pledge to do all I can to help bring more American business to Lesotho to further our economic partnership.

I am delighted to report that the Power Purchase Agreement for the OnePower/Neo1 project was initialed. This is a wonderful development for the Mafeteng district that will bring an additional 20 megawatts of solar energy to Lesotho. What’s more, the American Director of One Power is a former Peace Corps volunteer, who was determined to return to this country and help propel its development of clean energy.

Whenever I visit American-owned businesses in Lesotho, I am struck by their commitment to the communities and to building capacity within their workforce. At Sanlei Trout farm in Katse, a young Mosotho man showed me how he raises fish from tiny eggs to full-sized trout for top quality exports. He was so professional and dedicated to the process and I was so proud to see the impact of the knowledge transfer happening between Basotho and Americans.

Later this year, we will celebrate 50 years of the Peace Corps in Lesotho. Truthfully, it has been more than 50 years, but we wanted to do the celebration right!  Since 1967, more than 2500 American volunteers have served in this program – focusing on Education and Healthy Youth. Volunteers in both projects contribute to Lesotho’s response to the HIV epidemic in the country and to the goals of PEPFAR in Lesotho.

Recently I heard a story about two Cabinet Ministers who were looking for a school in the highlands. It was a Peace Corps volunteer who stopped to provide them with directions to their destination. When I ask these volunteers, “Where are you from?” They don’t say,  California, New York, or Texas. They say, “Mokhotlong, Thaba-Tseka, Leribe.” So on behalf of the United States and all the volunteers past and present, I say thank you to the host communities who make their work possible, meaningful, and life-changing.

It is not just Americans coming to Lesotho that make a difference; it is also Basotho who make an impact in the United States. Since 1964, even before Lesotho’s independence, we have sent more than 2000 talented Basotho on exchange programs, like Fulbright, International Visitors Leadership, and more recently, YALI. These are not here today, gone tomorrow programs. These are our investments in Lesotho, particularly the next generation of leaders.

Just last week, twelve young Basotho departed for the United States, for the YALI Mandela Washington Fellowship, seven weeks of leadership development or “leadership bootcamp” we call it. We selected them not because YALI will make them leaders, but because they already are leaders. These young people are destined to be servant leaders who propel Lesotho forward, creating more opportunities and better outcomes for themselves and their fellow citizens.

As I said earlier, the United States recognizes the many steps the country has taken to address issues of political reform.  However, many challenges remain on the road ahead. The process is, by necessity and by design, a long and complicated one. Nonetheless, Lesotho cannot afford further delay or derailment.

The United States has been Lesotho’s firm, committed partner for more than five decades, through the good times and the bad. On this occasion, which honors America’s Independence and our ongoing efforts to form a more perfect union, the United States calls on all sides, Ministers, members of Parliament, political party leadership, government officials and public servants, the Military and Police, businesspeople, civil society representatives, media, and all others to maintain the momentum and commitment to the process of multi-sectoral, inclusive, and transparent reforms.

Bo-‘M’e le Bo-Ntate, as a newcomer to this Kingdom, I am truly inspired by the legacy of your founder and first King, Morena Moshoeshoe Oa Pele. He was a diplomat, a mediator, a leader who protected and elevated his people to their refuge atop Thaba-Bosiu. He made their security, their well-being, and indeed their very survival as a nation, his utmost priority. The issues that face you today as Lesotho’s leaders are as compelling and significant as those faced by your great founder.

His Majesty King Letsie III reminded us of King Moshoeshoe I’s legacy recently when he called upon all the country’s leaders to be united as brethren, to put aside past wrongs, and work together to attain everlasting peace. The power and ability to do so rests with each of you, as the heirs of King Moshoeshoe I. The time is now and the responsibility is yours, collectively and individually, to elevate the needs of Basotho above all else.

Friends, I have been here for a short time, but I already have a favorite saying in Sesotho – Motho ke Motho ka Batho. We are who we are because of other people. To me, this saying embodies our partnership with Lesotho and underscores the enduring values of the United States. The United States of America remains Lesotho’s loyal and committed friend, as we continue our partnership into the next 50 years and beyond!