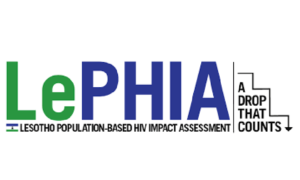 Please allow me to start off by paying my respects to

The Right Honorable the Prime Minister,

Honorable President of the Senate,

Honorable Speaker of the National Assembly,

His Lordship the Chief Justice,

Honorable President of the Court of Appeal,

Honorable members of His Majesty’s cabinet, especially Honorable Minister of Health Maqelepo who is here with us,

Your Excellencies Heads of Diplomatic Missions and International Organizations,

Senior government officials from the Ministry of Health,

The U.S. Embassy, ICAP, and LePHIA teams also here with us,

Members of the Press,

It is my great pleasure to stand here in Matsieng, on the eve of World AIDS Day, to handover the preliminary results of LePHIA 2020, to Her Majesty Queen ‘Masenate Mohato Seeiso. As the Champion of this survey, Her Majesty Queen ‘Masenate has been instrumental in supporting this critical assessment of the current state of the HIV/AIDS epidemic in Lesotho. Your Majesty, thank you for your unwavering support of this survey and thank you the enduring partnership between our two nations.

Allow me to also acknowledge Honorable Minister of Health Maqelepo, whose leadership has made today’s event a reality. LePHIA was completed this year because of the government’s tremendous work through the Ministry of Health and HIV/AIDS care and treatment partners to evaluate the impact of the efforts taken towards controlling the HIV epidemic in Lesotho.

Today, we are here because the Kingdom of Lesotho has much to celebrate! Lesotho is a shining example to the world of hope, courage, and resilience! It’s a success story that the world needs to hear! Lesotho is one of only two nations to successfully conduct a second-round HIV impact assessment survey this year; and Lesotho accomplished this in the middle of the global coronavirus pandemic and despite its attendant hardships. Lesotho’s 2020 LePHIA results demonstrate the power of what strong commitment and collaboration can accomplish. The year’s survey measures the progress we’ve made since the initial assessment in 2016-2017.

Lesotho, with the support from the U.S. Centers for Disease Control and Prevention, ICAP at Columbia University, along with the National Reference Laboratory, district health clinics, and local government authorities, implemented the survey and reached over 9,600 survey-eligible households. I want to offer my deep appreciation to the people of Lesotho who participated in LePHIA by allowing these survey teams into their homes. And thank you to each of the medical and technical experts from across the United States government, the Government of Lesotho, and partner organizations who worked to bring us to this very moment. Your daily efforts are saving lives and changing the course of this epidemic in Lesotho.

Since 2014 we have been striving to reach the 90-90-90 UNAIDS targets. These targets were set to give countries a goal that would signal an end to the devastation brought on by HIV/AIDS. But to know the road ahead, we had to know where we stood. LePHIA is that roadmap. It helps us understand where we are today in fighting this terrible disease. Through PEPFAR, the United States has invested 26.6 million dollars (that’s 407.5 million Maloti) in supporting the completion of two LePHIA surveys. The Lesotho PEPFAR program carried out the first LePHIA survey in 2016-2017 and those results gave us so much hope. Since that time, the

Lesotho PEPFAR program has supported innovative approaches to provide HIV testing to all (to include index testing and now self-testing) so that Basotho know their status. The Ministry of Health has also updated guidelines and been at the forefront, ensuring everyone has an opportunity to test. We will hear from Her Majesty today if these efforts have succeeded.

When the second LePHIA survey started last December, exactly one year ago, we had no idea that a pandemic would have such a devastating impact on our lives and work. With great persistence, the survey was completed just before the nationwide lockdown in March. We were grateful for a smooth deployment throughout the country – from the mountains of Mokhotlong, to Leribe and Mafeteng, survey teams remained laserfocused and undaunted by the conditions and challenging terrain. I am in awe of their dedication to capturing the critical data needed to facilitate this nationwide assessment. To every community represented in the survey, your participation has mattered. We thank you!

Last fall, I had the honor of inviting Her Majesty to celebrate the Embassy’s PEPFAR Champions, a group of ten (10) Basotho individuals who embody the work PEPFAR is doing in the Mountain Kingdom. They each detailed their stories of working diligently to spread awareness and how they actively fought back against the stigma and discrimination that keep Basotho (particularly young people and men) from accessing health services, whether for testing, prevention, or treatment. When I think back to that event, what’s most remarkable is that this group of Champions represents each and every Mosotho man and woman who has found a way to take an active role in building a healthier, more stable, and more prosperous future for this beautiful nation. To our Champions and to all Basotho, thank you for your hard work and dedication to the fight against HIV. I applaud you all!

Once again, Your Majesty, thank you for your extraordinary leadership and incredible work as Champion of the LePHIA survey. I will forever hold very dearly in my heart the experience of walking alongside you and the LePHIA survey team earlier this year in Morija, where we interacted with Basotho families and experienced the warmth of their homes and learned first-hand how the survey would be conducted. On behalf of my team at the U.S. Embassy in Maseru and the entire United States government, Rea Leboha, Your Majesty!

As I reflect on my time in Lesotho, I am deeply encouraged today. I am so very proud to stand with you to witness the achievements of our work together — saving millions of lives, significantly lowering the burden of HIV in Lesotho, and beginning to reduce the future costs required to sustain the response to this epidemic. As the United States Ambassador, I want to underscore that our government is committed to working directly with communities across Lesotho to deliver quality care that provides accessible treatment and improved outcomes. We should be incredibly proud of the progress made over the past four years and energized as we continue working toward the next milestone — reaching the UNAIDS 95-95-95 targets by 2025!

As I conclude, it is with great honor that I now present to Her Majesty Queen ‘Masenate the preliminary results of the 2020 Lesotho PopulationBased HIV Impact Assessment.