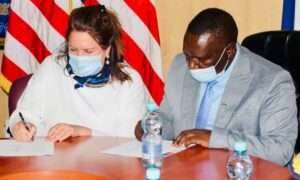 Maseru, Lesotho, November 8, 2021: On November 3, the United States of America and the Kingdom of Lesotho signed a Memorandum of Cooperation (MOC) designed to enhance bilateral border security and criminal justice programs. The MOC allows the Lesotho Mounted Police Service (LMPS) and the Federal Bureau of Investigation (FBI) to facilitate interdepartmental cooperation to assist and inform criminal investigations.

In a signing ceremony between U.S. Ambassador to Lesotho Rebecca Gonzales and Minister of Police and Public Safety Lepota Sekola, the Minister lauded the longstanding relationship and close cooperation between the two nations as the impetus for the development of the MOC agreement. Other signatories included FBI Assistant Director of Criminal Justice Information Services Division Michael Christman, FBI Legal Attaché Jennifer Snell Dent, Principal Secretary of the Ministry of Police Tanki Mothae, and Commissioner of Police Holomo Molibeli.

For her part, U.S. Ambassador Rebecca Gonzales noted, “this formal FBI-LMPS partnership builds on the formidable relationship that the United States and Lesotho have maintained for more than five decades. We are hopeful that the MOC we are signing today will go a long way in enhancing the ability of the LMPS to address crime, especially at a time when Lesotho continues to face a significantly alarming rate of murder cases.” She further noted that the historic MOC signing was the beginning of greater bilateral cooperation between the two nations.

In the coming months, the FBI is planning three trainings to support the cooperation outlined in MOC: Basics of Fingerprinting, Facial Comparison and Identification Training, and Advanced Comparison for Fingerprint Examiners. As noted following the FBI visit to Lesotho in September, the Naval Criminal Investigative Service has scheduled an upcoming training on crime scene forensics. The Diplomatic Security Service also has plans for law enforcement training to increase anti-trafficking-in-persons efforts across the Southern Africa region.