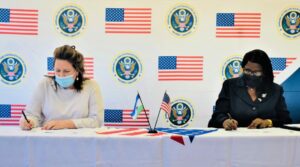 Maseru, Lesotho, December 2, 2021:  On Monday, November 29, U.S. Ambassador Rebecca Gonzales and Minister of Tourism, Environment, and Culture Honorable Ntlhoi Motsamai renewed the Memorandum of Understanding (MOU) for the American Corner in Maseru with a signing ceremony at the State Library.  Ambassador Gonzales also handed over ten desktop computers, a donation from the American Corner to the State Library.

The MOU signing underscores the longstanding bilateral partnership between the United States of America and the Kingdom of Lesotho.  Renewing the MOU for another biennium provides the citizens of Lesotho with important library resources, internet access, and programming and events, which are all free of charge.

Ambassador Gonzales noted that “since 2016, the American Corner has been an integral part of U.S. Embassy Maseru’s outreach to young Basotho.  By providing free internet access, library resources, and programming and events, we are empowering the Mountain Kingdom’s next generation of leaders with the tools they need to succeed.  Specifically, our YALI Innovation Hub and new iMac lab will support the development of young Basotho entrepreneurs. The expansion of our EducationUSA Advising program gives direct support to a growing cadre of Basotho high school students who are interested in studying in the United States.”

For her part, Minister Motsamai thanked Ambassador Gonzales and the U.S. Embassy in Maseru for the continued bilateral support through the American Corner, noting that the MOU renewal is a demonstration of the partnership between the United States of America and the Kingdom of Lesotho in providing the public, especially Basotho youth, with access to information, educational opportunities, and other important services.  Further, Minister Motsamai stated that the donation of computers will go a long way in ensuring the State Library is able to provide additional digital resources for its patrons.