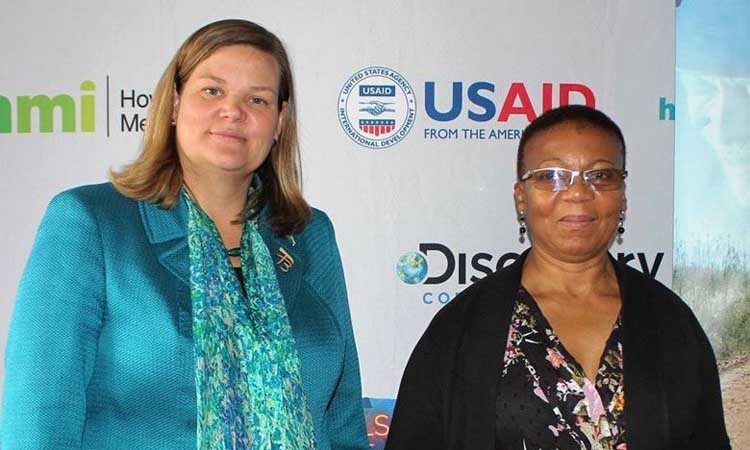 Deputy Chief of Mission Elizabeth Pelletreau and Dr. Mosilinyane Letsie from the Ministry of Health during the 'Lucky Specials' movie premiere in Lesotho.

In commemoration of World TB Day 2017, Deputy Chief of Mission Elizabeth Pelletreau, together with officials from the Ministry of Health, attended the Lesotho premier of TheLucky Specials, a feature film designed to both entertain audiences and to educate them about tuberculosis (TB). The film was created with the support of the United States Government through the Agency for International Development (USIAD) and the President’s Emergency Plan for AIDS Relief (PEPFAR) as a tool to engage communities on TB education, prevention, treatment, and drug adherence.

In Lesotho TB is the leading cause of death among individuals living with HIV/AIDS – accounting for one in three AIDS-related deaths in 2015. According to the recent Global TB Report there were an estimated 17,000 TB cases in Lesotho in 2015. Of those 17,000 cases, 12,000 were co-infected with TB and HIV which is a 70% rate of co-infection. For the past decade, the U.S. has been firmly committed to helping Lesotho fight both HIV and TB

At the event, Deputy Chief of Mission Pelletreau said, “What is important to understand, is that while TB can be deadly, it is also treatable. So it’s critically important that those who suspect they have TB and those who have been diagnosed with HIV seek treatment and adhere to your medication.”

The Lucky Specials was made possible through a U.S. government partnership with Discovery Learning Alliance, Quizzical Pictures, Howard Hughes Medical Institute, the Wellcome Trust, and Management Sciences for Health (MSH). The trailer for the film can be viewed here: www.luckyspecials.com.

For further information, please contact the Public Affairs Section of the U.S. Embassy at 2231-2666 or email NkhahleRA@state.gov.