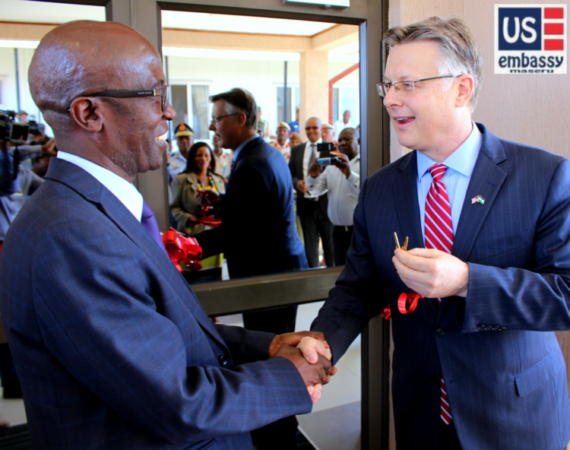 United States Ambassador Matthew T. Harrington officially handed over at Makoanyane Barracks a newly-constructed health clinic dedicated to the fight against tuberculosis (TB). This $1.4 million state-of-the-art facility will help the Lesotho Defense Force provide high quality TB services to uniformed personnel and their families as an element of the longstanding support given by the United States Government to Lesotho’s military in the fight against HIV..

In Lesotho, TB is the leading cause of death among individuals living with HIV/AIDS, accounting for one in three AIDS-related deaths in 2015.  According to a recent Global TB Report there were an estimated 17,000 TB cases in Lesotho in 2015.  Of those 17,000 cases, 70% were co-infected with TB and HIV.  For the past decade, the U.S. has been firmly committed to helping Lesotho fight both HIV and TB.  This year, through the President’s Emergency Plan for AIDS Relief (PEPFAR), the U.S. will provide $5.2 million in TB/HIV funds to support activities that help prevent the spread of TB and minimize deaths related to the disease across the country.

Ambassador Harrington said at the event, “The United States and the Kingdom of Lesotho have been partners for over 50 years and the building we dedicate today is a testament to that partnership. Together, we are making progress, but there is clearly much work left to do, and we will continue to be by your side in this monumentally important struggle.”

The TB clinic was a collaborative effort among the U.S. government, the Ministry of Health, the Lesotho Defense Force, and the architectural and engineering firm, Zias Company.

The United States Government, with the generous support of the American people, has committed more than $300 million to the HIV response in Lesotho. Since 2001, the U.S. has supported HIV/AIDS prevention activities within the Lesotho Defense Force (LDF), including by supporting programs to support HIV testing and provide high quality Volunteer Medical Male Circumcision (VMMC) services, educational materials, condom distribution, and training for LDF HIV counselors.  The United States remains committed to fighting HIV in Lesotho by increasing the number of Basotho who know their HIV status and increasing the number of people on life-saving treatment.