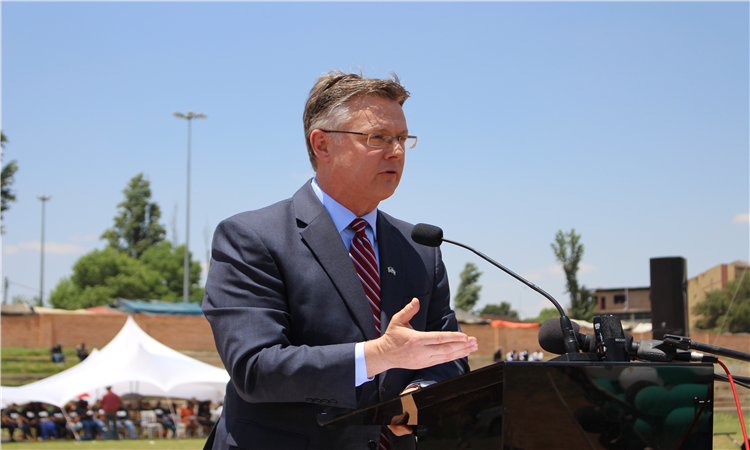 Ambassador Harrington at LePHIA the launch in 2016

In a ceremony held at the Pitso ground in Maseru, U.S. Ambassador Matthew Harrington joined Her Majesty Queen ‘Masenate Mohato Seeiso and the Minister of Health Dr. ‘Molotsi Monyamane to launch the Lesotho Population-based HIV Impact Assessment (LePHIA) Survey. This survey will measure the reach and impact of the country’s HIV prevention, care and treatment services in Lesotho. It will also provide an estimate of HIV incidence, prevalence, and viral load suppression among adults and children.

The LePHIA survey will help health authorities, policymakers and development partners better understand the relative impact of HIV on everyone in the population, not only people living with HIV but also their family, friends, and community.

The Lesotho Population-based HIV Impact Assessment (LePHIA) survey is a collaborative effort between the Ministry of Health, the U.S. Centers for Disease Control and Prevention (CDC), and ICAP at Columbia University. It is a five-year initiative funded through the President’s Emergency Plan for AIDS Relief (PEPFAR) that consists of household-based, population surveys which will collect information related to HIV in approximately 10,500 households throughout Lesotho.

Ambassador Harrington said at the launch, “This has been a historic year, one which marked 50 years of independence for Lesotho and 50 years of partnership between the United States and the Mountain Kingdom. During that half-century, Basotho and Americans have achieved some important milestones together, and PEPFAR is one of the most important elements of our partnership.  Working together against HIV/AIDS, we are making progress in key areas, but there is still a long way to go to get this epidemic under control. The PHIA, and the critical data that it will produce, will help us get there, and we are proud to support it.”