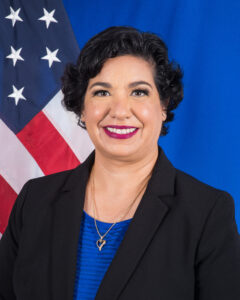 United States Ambassador to the Kingdom of Lesotho Maria E. Brewer presented her credentials to His Majesty King Letsie III at the royal palace on March 10, 2022.

During the presentation of her credentials, Ambassador Brewer said to His Majesty King Letsie III, “on behalf of President Joseph R. Biden and the American people, I commit my government’s friendship, support, and partnership to work alongside you and the Government of Lesotho to build a brighter future for the Basotho people.”

Ambassador Brewer is a career member of the Senior Foreign Service.  She was nominated by President Biden as Ambassador to the Kingdom of Lesotho in April 2021.  She was confirmed by the U.S. Senate on December 18, 2021.

Ambassador Brewer served as the United States Ambassador to the Republic of Sierra Leone from 2017 to 2021.  She previously served as the Deputy Director in the Office of Career Development and Assignments for the U.S. State Department; as the Deputy Chief of Mission and Chargé d’Affaires of the U.S. Embassy in Abuja, Nigeria; and as a leader of the management team at the U.S. Embassy in Islamabad, Pakistan.  Earlier in her career, Ambassador Brewer served as the Management Officer at the U.S. Embassy in Colombo, Sri Lanka and Management Officer at the U.S. Consulate General in Mumbai, India.  She also was Deputy Executive Director and Supervisory Post Management Officer in the State Department’s Bureau of African Affairs; Special Assistant to the Under Secretary of State for Management; and Special Assistant to the Assistant Secretary of State for Administration.

Prior to joining the Foreign Service in 1996, Ambassador Brewer earned a B.A. from Valparaiso University and an M.S. from the National Defense University, Industrial College of the Armed Forces.  She speaks Spanish, Krio, and Hindi.